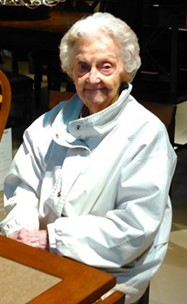 Mrs. Katherine Rose Fay, mother of Msgr. William P. Fay, on the faculty of Pope Saint John XXIII National Seminary passed to the Lord on Friday, September 16. May she rest in peace.

A longtime resident of Natick, MA, Katherine (Kay) was the daughter of the late Patrick and Margaret (Walsh) Kiernan of Boston.  Katherine was the loving wife of the late Warren Gerard Fay, and mother to the late Kathleen Marie (Fay) Newman, the Reverend Monsignor William Patrick Fay of Weston, MA, Margaret Mary Fay of East Falmouth, MA, Robert Warren Fay of Center, SC, and Patricia Ann (Fay) Staples and her husband Daniel of Naples, FL.  She is also survived by her grandchildren, Theodore Newman of Sterling, MA, Bethany Fay of Winston-Salem, NC, and Kenneth Fay and his wife Jeanee of Tucson, AZ, and her great grandchildren Sarah Newman, Benjamin Newman, Hunter Stewart, Aiden Fay and Kennedy Fay.

Katherine was a devoted Catholic and a member of Good Shepherd Parish in Wayland, MA where she volunteered for years.  Along with her work as a medical secretary, she also volunteered for many years at Carmel Terrace and St. Patrick’s Manor where she lived these past six years and died.  A special word of thanks goes to the Carmelite Sisters of the Aged and Infirm and to their staff for the loving care that they provided.

Condolences may be sent to: